Shore hardness is one of the indentation methods used to measure material hardness. As a rule, Shore hardness is measured for plastics, elastomers, rubbers and their vulcanization products.

In the 1920s, this method and the measurement scale itself were proposed by Albert F. Shore. He also created a measuring device, which was named "durometer". Shore hardness, denoted as a number, to which a letter is assigned, indicating the type of hardness according to the measurement method or device data (resistance of any material to the indentation of a tip of a certain shape under the force of spring pressure). The higher the resistance number, the higher the hardness. For example, "Shore 30A, 80D" or "Durometer 30A, 80D". But most often in terminology the first of these designations is used - "Shore hardness".

The hardness of polymeric materials, in particular polyurethanes, is measured by determining their hardness according to Shore A and Shore D. The "A" scale is intended for softer materials (elastomers such as silicone or rubber - hardness from 10 to 97 Shore A), while as "D" is used to denote harder plastics (from 40 to 85 Shore D). This method of measurement is convenient due to the simplicity of the design of the measuring device and the ability to quickly carry out measurements. It allows you to carry out measurements on finished products, large-sized parts, as well as curved surfaces with sufficiently large radii. Because of this, this method is so widespread in industrial practice. 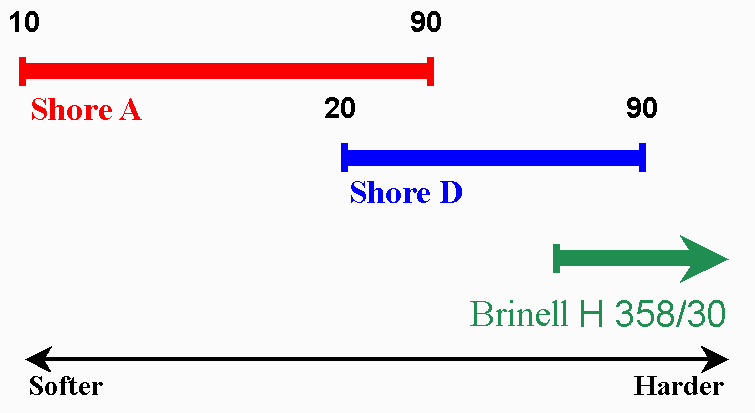 An example of the Shore hardness of some common materials (products)

You can order polyurethane products with a hardness from 45 Shore A to 85 Shore D. Samples you can see in our office. There we can give you an advice and select the material, according to your needs and desires.

In addition, we offer the manufacture of products from silicone with hardness from 13 to 60 Shore A.

The path from prototyping to vacuum casting of plastics

What is the difference between prototype and master model?

How works 3D prototyping for casting of plastic?

The technology of vacuum plastic casting into silicone molds

Your request has been accepted!

Please check that you entered the correct information and try again

Please share your impressions about the cooperation with the Marabu company